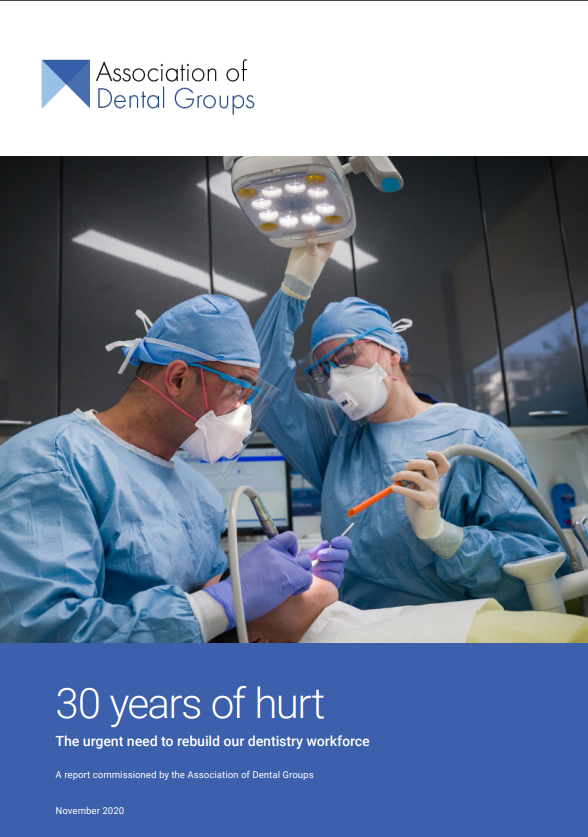 A new report from the Association of Dental Groups (ADG), published today, projects that around 8 million people will be waiting for NHS dental treatment this Christmas, but unable to access a dentist to perform it.

The findings point to an unprecedented proportion of people being unable to access the NHS at any one time – 8 million people represents around 14% of the English population, or around one in seven people.

The fear among dentists is that record numbers of mouth cancer cases are going undiagnosed while more than a million fillings may have been missed this year.

The analysis is published today by the Association of Dental Groups, who commissioned Matt Hancock’s former aide to conduct an independent ‘state of the nation’ report on access to dentistry.

The work shows London to be the worst region in the country to access a dentist, with around 1.5m people in the capital waiting at Christmas – equivalent to around 17% of its population, or one in six people. The Midlands will have 1.3m waiting; around one in eight people.

In the report, titled “30 years of hurt”, Mr Sloggett notes that restrictions on the flow of people that can be seen in dental surgeries due to the pandemic are quickly making access a huge problem. He points out that the root cause is that the system has been underfunded and neglected for decades.

“For 30 years, dentistry in England has been the forgotten service of the NHS. It is time for that to change.”

The report suggests there is no way at present to tackle the backlog due to a crippling lack of NHS dentists and proposes several urgent recommendations for boosting dentistry recruitment, including by:

Commenting on the report, Neil Carmichael, Chair of the Association of Dental Groups and former Conservative MP for Stroud said: “These figures represent real suffering, with hundreds of thousands – potentially over a million – fillings going unperformed, plus a host of other treatments piling up, as well as undiagnosed cases of mouth cancer. Even when the Covid restrictions are lifted, dealing with this will take months. We need urgent action now to draft in more dental professionals to tackle the crisis.”

The report can be found at https://www.theadg.co.uk/.