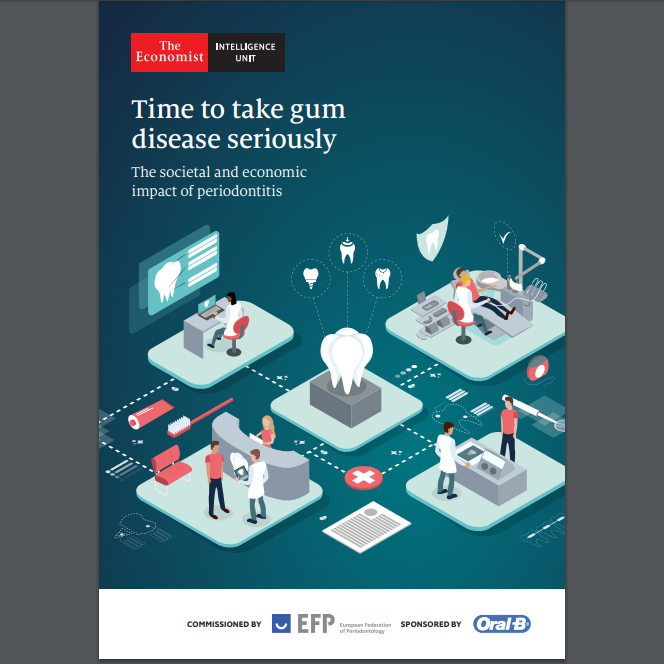 A report commissioned by the European Federation of Periodontology (EFP) and published by the Economist Intelligence Unit (EIU), the research and analysis division of the Economist Group, provides a comprehensive analysis of the financial and human cost of gum disease in six Western European countries.

The report, Time to take gum disease seriously: The societal and economic impact of periodontitis, was published on June 15 and explains how more effective prevention of gum disease could save billions in healthcare costs and lead to healthier lives. The six countries included in the study are France, Germany, Italy, the Netherlands, Spain, and the UK.

As the report makes clear, periodontitis is largely preventable with good oral hygiene and regular dental check-ups. However, it shows how in Western Europe little progress has been made in the prevention and management of periodontitis, with prevalence remaining largely unchanged over the last 25 years. One key factor highlighted by the report is that many people visit a dentist only when they have a problem and avoid regular appointments because of the cost.

After providing evidence that professionally managed periodontitis is cost-effective, the study argues that “publically covered dental care for periodontitis deserves a review from policy makers and commissioners Europe-wide”.

The report therefore seeks to “capture the attention of policy makers” in the six countries studied, emphasising the economic and societal benefits of action in the early treatment of periodontitis, and arguing that “given the prevalence and preventable nature of periodontitis, new ways of thinking about gum health are needed to increase awareness and action at national level.”

The prevention, diagnosis, and management of periodontitis is cost-effective:

Better integration of dental and general healthcare is required:

A synergy of societal and individual public-health campaigns is needed:

The affordability of dental care needs to be improved:

Few studies have modelled the economic burden of periodontitis and the return on investment (ROI) of treatment and the report’s authors developed a model to examine the ROI of preventing and managing periodontitis, with separate modelling performed for France, Germany, Italy, the Netherlands, Spain, and the UK.

The model used in the study was based on EFP treatment guidelines that outline four intervention points in the progression from (1) health to (2) gingivitis, (3) undiagnosed periodontitis, and (4) diagnosed periodontitis. The estimates for the current national situation in each of the six countries determined the number of individuals starting at each stage of the model.

The authors modelled the transition between the stages over a 10-year period according to five scenarios:

The authors noted that both eliminating gingivitis and increasing the rate of diagnosing and treating periodontitis to 90% had a positive ROI for all countries and gains in healthy life years compared to business as usual. Neglecting to manage gingivitis had the opposite effects. They called for greater emphasis on self-care and prevention at the individual and societal level, including nursery-based dental care and tooth brushing workshops in schools.

The EFP’s current and former secretaries general, Nicola West and Iain Chapple, contributed to the report and the EIU also carried out interviews with 17 other leading periodontists. The economic modelling was performed by health economists David Tordrup and Tim Jesudason of Triangulate Health.

“It is hugely challenging to determine the economic and societal costs of a complex disease like periodontitis, which is why we needed an independent expert group like the EIU to undertake this modelling,” said Iain Chapple, professor of periodontology at the University of Birmingham, former EFP secretary general, and member of the EFP Workshop Committee member. “Their data clearly demonstrates that by far the biggest ROI comes from the prevention of periodontitis – i.e., by treating gingivitis – something traditionally regarded as trivial and ignored – rather than with treatment being directed at periodontitis, which is of course too late.”

Nicola West, professor of periodontology at Bristol University and EFP secretary general, said: “I am delighted with the analysis presented by the EIU, highlighting the benefit to healthcare providers of treating gum disease early to realise gains in healthy life years, advancing the European Federation of Periodontology’s purpose of promoting periodontal health for a better life.”

The EIU report was sponsored by Oral-B, part of the Procter & Gamble Company. “Dental diseases, including periodontitis, are a burden both on an individual and societal level; fortunately, they can be prevented through oral health maintenance,” said Leslie Winston, vice president of global oral care professional and scientific relations at Proctor & Gamble. “Key factors are mechanical and chemical plaque control, e.g., using an electric toothbrush with an antibacterial fluoride toothpaste and interdental cleaning. Another important element is to visit dental healthcare providers regularly to ensure that any emerging issues are addressed while they still can be reversed.”