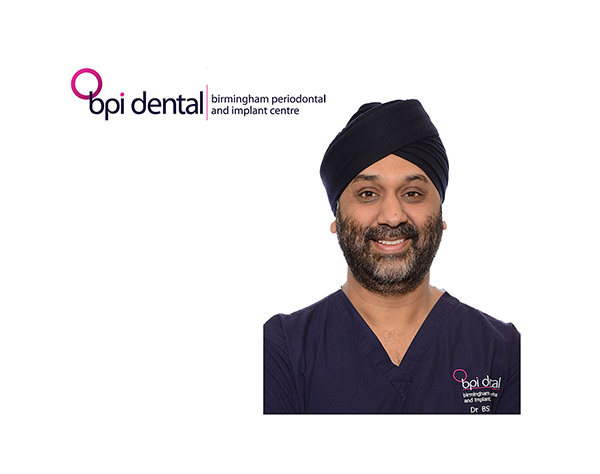 A patient was referred to BPI Dental about 10 and a half years ago. His main concerns were the sensitivity he was experiencing and he didn’t like the cosmetic appearance of his front teeth (Figure 1). Significant gingival recession was identified on the upper 5-5, which seemed to be the result of over brushing for several years. The patient had previously had some Class V composite work done (Figure 2) to address the sensitivity issue, but otherwise there was no relevant medical or dental history. Upon clinical assessment, we identified a thin gingival biotype and a Class I Miller defect.

The treatment options presented to the patient included:

All options were discussed with the patient, covering the procedures, the risks and benefits of each solution. The patient expressed a preference for the surgical approach in order to achieve root coverage.

The previously placed composite was removed and the root surface was professionally cleaned (Figure 3). A split thickness flap was then raised (Figure 4) while being mindful of the thin gingival biotype. A large amount of labial bone was missing (Figure 5). 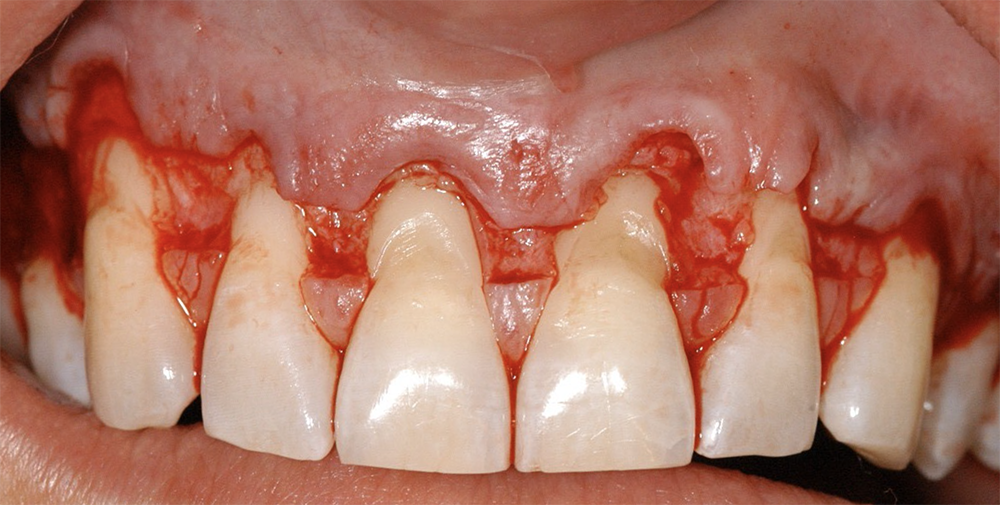 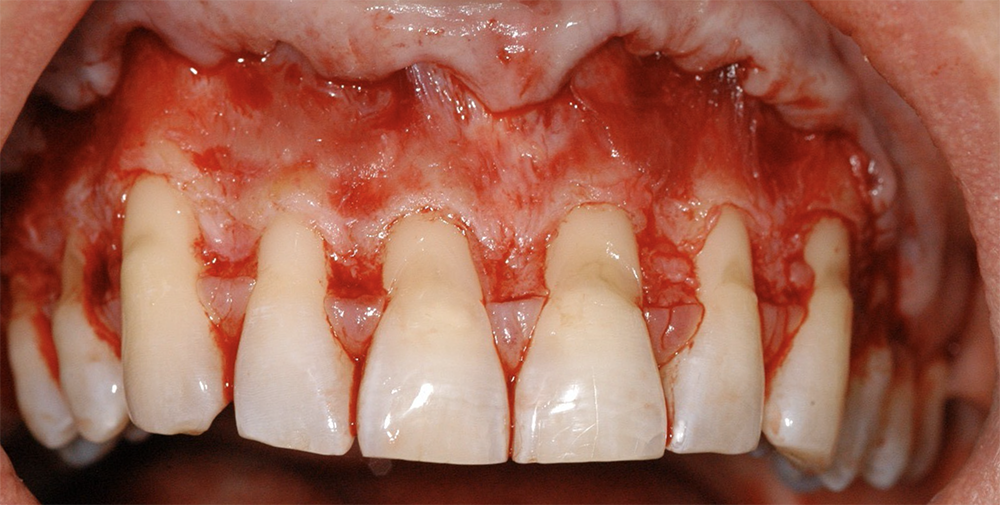 The remaining papillae were de-epithelised (Figure 6) to remove the superficial layer of soft tissue. As the flap was to be repositioned coronally, this would enable the papilla to integrate better for improved healing due to the blood supply. 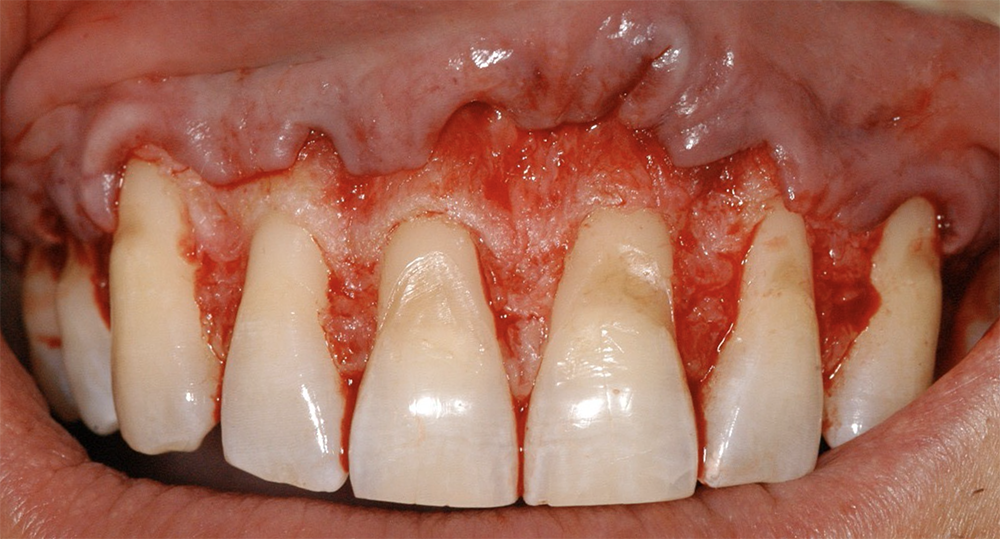 We then took two bilateral, sub-epithelial connective tissue grafts from the palate, with a single-incision approach. These were placed labially and held in position with a cross-mattress horizontal suture on the buccal surface (Figure 7). It is very important to ensure stability of the grafts and to also minimise the blood clot present across the graft and root surfaces of the teeth. Once everything had been checked, the flap was closed over the connective tissue graft (Figure 8) using PTFE Teflon sutures. 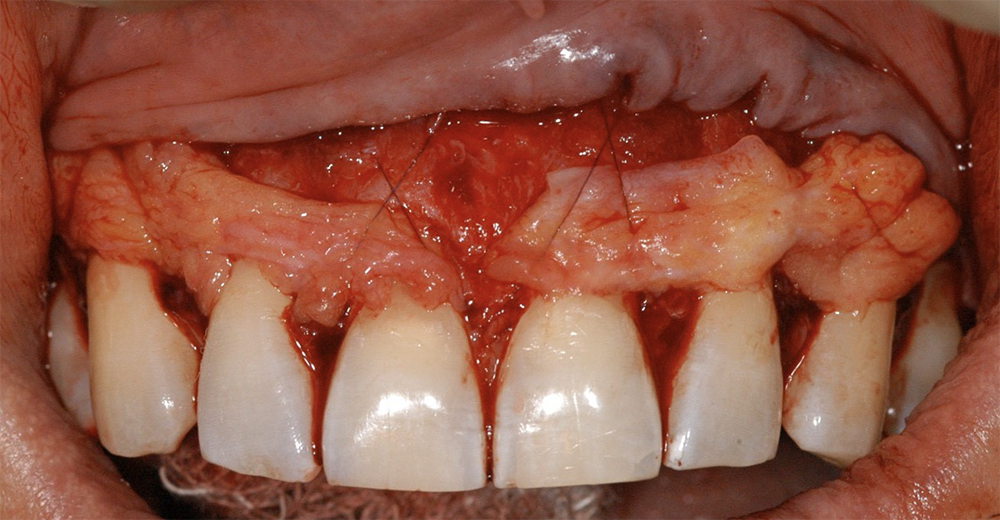 The patient returned to the practice two weeks later for the removal of sutures (Figure 9) and there was very good root coverage on 5-5. Four weeks later the patient was reviewed again, by which time very good papillae were developing. There was no loss of interproximal papilla and the soft tissue was integrating very nicely (Figure 10). At three months (Figure 11), excellent root coverage had been achieved, which both the referring practitioner and patient were extremely pleased with. There was some surface loss on the central incisors, but we advised the patient to leave it alone for a while before any fillings were placed. 12 months later (Figure 12). The difference between the before and after photos is incredible (Figure 13) and the patient was delighted that we were able to address both his concerns from the beginning of treatment – the sensitivity had been eliminated and his smile looked fantastic.

Even as long as 10 years post-treatment (Figure 14), there was almost 100% root coverage. Two Class V fillings had been placed on the upper central incisors about 7 years ago with Dr Gurvinder Bhirth and there had been some very slight recession on the UR2 of around 1mm or less, although this had been completely unnoticeable over the 10 years.

There are many different techniques available to clinicians today that help to address the effects of gingival recession. However, the connective tissue graft and coronally repositioned soft tissue flap has been proven to be the best long-term solution. It has an extensive body of research behind it, making it a well-documented clinical technique that practitioners can rely on for long-lasting results. This case supports this, in that the 10-year follow-up demonstrates excellent root coverage.

It’s necessary for GDPs to record all recession defects. It’s also important to know that things can be done – patients do not just need to put up with recession, especially if they are concerned about sensitivity or aesthetic issues. In some cases a periodontal approach (plastic periodontal surgery) can be preferable to a restorative one, as it leads to root coverage and the patient needn’t use sensitivity toothpaste. Equally, fillings – especially Class V fillings – often need to be replaced and so surgical intervention can reduce the need for repeat restorative treatment.

Plastic periodontal surgery offers a long-lasting and reliable solution in many cases of gingival recession, even where a thin gingival biotype is identified. Where GDPs do not have the skills or experience to perform referral to a specialist is key, presenting the patient with treatment choice as part of the best possible service.

Boota graduated in 1992 and later gained an MSc in Periodontology from Liverpool University. He became a lecturer at the University and passed his Membership in Restorative Dentistry from the Royal College of Surgeons of England in 2000 to become a registered Specialist in Periodontology. Since then, Boota has lectured at universities and educational events in the field of periodontics, dental implantology and bone / soft tissue augmentation, running his own implant training programme for colleagues as well. He is also an active member of the British Society of Periodontology, the Association of Dental Implantology and the American Academy of Periodontology.