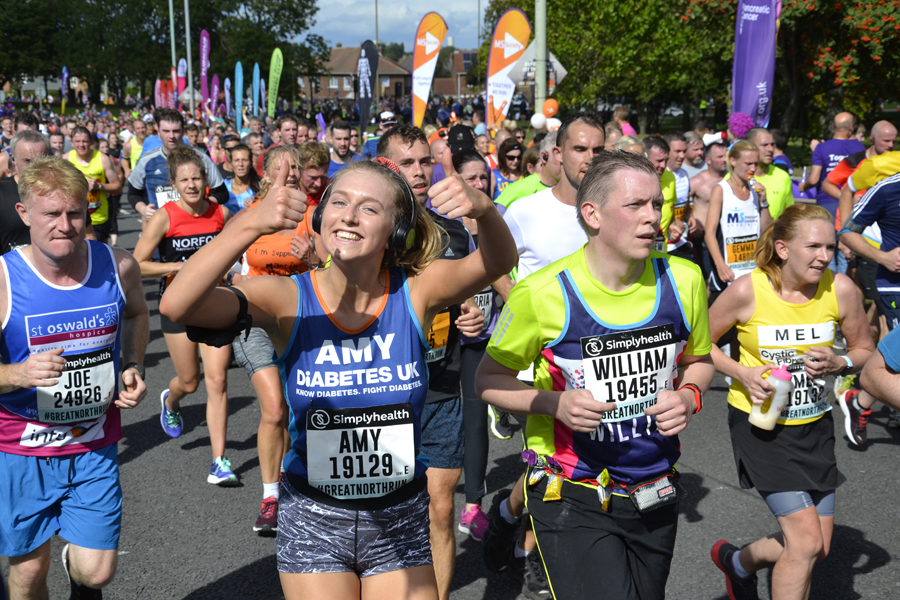 Simplyhealth is delighted to announce that it has chosen Diabetes UK as the official charity partner of the Simplyhealth Great Run Series 2019 – the UK’s biggest programme of mass participation running events for people of all ages and abilities, including the iconic Simplyhealth Great North Run, the world’s biggest half marathon.

Diabetes is a condition where there is too much glucose in the blood because the body cannot use it properly. It is the most devastating and fastest growing health crisis of our time, affecting more people than any other serious health condition in the UK – more than dementia and cancer combined.

By partnering with Diabetes UK, Simplyhealth is able to continue supporting people with their health, encouraging as many people as possible to become more active on a regular basis for better physical and mental wellbeing.

Bambos Neophytou, Brand Director, said: “We know that physical activity is a vitally important way for people living with or at risk of diabetes to manage their health more effectively. Research tells us that three out of five cases of Type 2 diabetes could be prevented or delayed by making healthy lifestyle changes including exercising – be that running, jogging, walking, swimming, or cycling on the flat. We want our partnership with Diabetes UK to drive positive change to peoples’ health and wellbeing, and encourage more people to make healthy choices to reduce the risk of diabetes.”

Laura Kirkwood, Head of Community and Events at Diabetes UK, said: “We’re excited about the opportunity to increase awareness of how physical activity can help people manage or reduce risk of Type 2 diabetes. Exercise can also help people with Type 1 to gain better control over their condition. Unlike Type 1 diabetes, Type 2 can be prevented or delayed by making healthier choices, including following a healthy diet and taking increased physical activity. Together we can reach more people at risk of Type 2 diabetes and help them make positive changes to their health, in order to prevent one of the biggest health challenges facing people living in the UK today.”

Olympic athlete, Laura Muir, will be also joining the British team as she makes her season debut. “It’s always nice to get out into the countryside of Scotland for a run early in the New Year, especially when it’s at an event like the Simplyhealth Great XCountry. This year a new venue adds an extra bit excitement and I’m looking forward to racing the new course with the backdrop of Stirling Castle.”

Whether you’re training for your first ever event or have your eye on a marathon PB, Simplyhealth is here to support you every step of the way.

As official charity partner, all participants for any of the Simplyhealth Great Run events without a chosen charity will be encouraged to run for Diabetes UK.

For experts tips and information on how to get the best out of your pre-event training and your running journey, visit our Train & Prepare pages at www.greatrun.org/training-simplyhealth.