Passion Beyond the Practice: “I’ve received 52,000 knitted hearts through the post!” 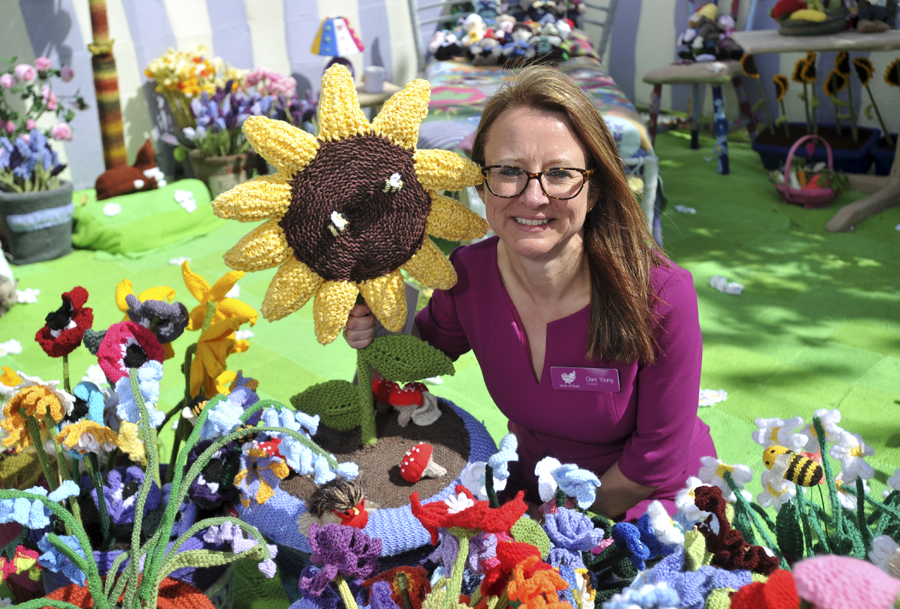 The Work of Heart knitted garden in aid of Sue Ryder, Leckhampton Court Hospice is unveiled at RHS Malvern Show. Clare Young wanted to create the garden in memory of husband Ken who died at Sue Ryder and to raise money for the charity picture by Mikal Ludlow Photography 10-5-18 tel; 07855177205

LIBBY STONELL talks to former dental nurse, CLARE YOUNG, about her quest to raise awareness and £50,000 for Sue Ryder, a charity very close to her heart, by creating a knitted garden display…

“I qualified as a dental nurse in 1986 and worked in general practice until 1991, which was when I had my first child. After having four children in four years, I took some time out to care for them but then worked in a Dental Access Centre as a nurse, and then much more recently, as a receptionist in an Orthodontic practice. During careers sessions when I was studying for my A Levels, I was undecided what I wanted to do, until I stumbled on a section on dentistry in a careers book. I kept coming back to the chapter and then one day in my first term of Upper Sixth, a local dental practice rang my school as they had an apprenticeship dental nurse position available. I applied and got offered the job so left school immediately. It was the best decision I have ever made as I loved dental nursing.

What I miss most about being a dental nurse is the feeling of making a difference to patients who were nervous or in pain – I thrive on building relationships with people so working in general practice was perfect for me. I also miss the teamwork and how when you work for a dentist for a while, you instinctively know how to nurse for them.

My husband Ken died in 2015 at the age of only 47, after a 22–month battle with bowel cancer. I knew I’d find life tough after he died, but didn’t expect that I would end up with PTSD, major depression and anxiety. One day, during one of my therapy sessions with my Psychologist, who was treating my PTSD, she asked if I could knit as knitting has proven benefits for mental health. I could, but hadn’t knitted since my children were small. I left her consulting room, and later that evening a knitted doll pattern popped up on Facebook, so I thought I’d give it a go. I very quickly realised that I had to knit for a reason so decided to knit Christmas decorations for Sue Ryder Leckhampton Court Hospice, where Ken had received the very best care during his last three weeks of life. As I was 50 last year, I set myself a goal of raising £500 for them. The hospice receptionist’s partner then suggested I could yarn bomb a tree at the hospice, as a way of saying thank you to everyone there. I was then nicknamed “Gloucestershire’s Banksy” by local media and ended up raising £1,300.

At my 50th birthday party, my friend Suzy Hillier, who is Head of Commercial at Three Counties, asked if I would consider creating something for RHS Malvern’s Spring Festival in May this year. At first I thought she was crazy, but again, thought about it and had this rather mad idea to knit a garden! As Ken would have been 50 in June this year, I set myself an ambitious target of raising £50,000 in his memory through my garden, which I decided to call Work of Heart Garden. I’m very proud that £17,500 has already been raised at events and through my online giving page.

As Gloucestershire’s only hospice with inpatient beds, I know that every penny that supporters like myself raise is important to Sue Ryder, and the response from Sue Ryder Leckhampton staff has been overwhelming. My primary aim has always been to raise awareness that whilst going in to a hospice is a scary time, you also feel so supported and cared for just when you and your loved ones are at your most vulnerable. No money will ever repay the incredible staff and volunteers at Leckhampton Court for what they did for Ken but I am determined to keep fundraising until I reach my #50kforken.

I still can’t believe how I’ve gone from knitting on my own to leading a global wool movement of over 450 knitters and creating the world’s first full sized knitted show garden installation for the RHS! I think that as I was brave enough to admit to my mental health issues and that I find grief difficult, I’ve in some way allowed others to express their grief too.

From the very first seed of my idea for Work of Heart Garden, I’ve been driven by what I call #greaterforces. I usually get my ideas as I’m walking my little dog Maggie! I knew I wanted to make my project an evolving art installation and to include as many people as I could at the same time. Acknowledging my grief and love for Ken through knitting a heart was a very powerful thing to do and as it turns out, was what others did too. In total I’ve received 52,000 hearts through the post, many with touching messages of support and people’s own grief stories. I feel privileged that so many people have felt able to grieve through their knitting and share their stories with me too.

When I revealed Work of Heart Garden for the first time at RHS Malvern Spring Festival, I couldn’t possibly have imagined the opportunities I’d be offered afterwards! We were invited to display the garden at Earl & Countess Bathurst’s Cotswold Show in July and incredibly we are installing at Gloucester Cathedral from the 1st – 29th August which is a real honour. Whilst we’re there it will be the third anniversary of Ken’s death, so for me personally it will be quite an emotional time. In September the garden is part of the Autumn Show at Sue Ryder Leckhampton Court Hospice, which takes my extraordinary journey right back to where it all started.

What could be next I wonder? Many people say there should be a book or a film of my story, maybe we will be invited to Chelsea? Who knows?

My next big idea for 2019 is germinating nicely too…”