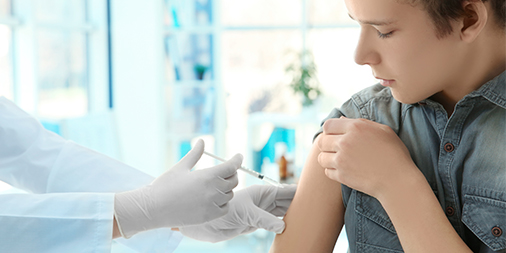 Following the recommendation today [18 July 2018] that school age boys in the United Kingdom should be offered a vaccination against the cancer causing Human Papillomavirus (HPV), a leading oral health charity is calling for the government to move quickly to implement a programme.

The Oral Health Foundation believes the recommendation made by the Joint Committee on Vaccination and Immunisation (JCVI), which has been under consideration since 2013, could save thousands of lives every year due to the vaccination’s ability to prevent HPV-related mouth cancer, as well as other life-threatening diseases.

The charity is now calling for health ministers to follow the JCVI’s recommendation and implement an effective vaccination programme swiftly.

Dr Nigel Carter, CEO of the Oral Health Foundation, feels far too much time has already passed in making the decision, leading to hundreds of thousands of boys being put at risk of potentially deadly diseases.

Dr Carter says: “This decision has been an incredibly long time coming and one we firmly believe it will be a significant moment in the ongoing battle against many types of cancer in the UK, but we now need a quick roll out of an effective programme.

“Under that programme, almost 400,000 boys have gone unvaccinated every year. This has left millions at risk of developing HPV related cancers, many of which are types of cancer on the increase.

“HPV is one of the leading causes of mouth cancer; which every year more than 7,500 Brits are diagnosed with and claims more than 2,000 lives – more than testicular and cervical cancer combined.

“We believe that with the swift implementation of the vaccination programme we will see a significant reduction in these numbers.”

The JCVI has recommended extending immunisation to adolescent boys alongside girls after concluding that a gender-neutral programme is highly likely cost-effective in the UK.

This follows recent recommendations from The European Medicines Agency, The World Health Organization and Cochrane Group who have all advised that the HPV vaccination is safe and effective1.

A quick implementation could now bring to and end what the Oral Health Foundation has labelled ‘a dangerously discriminatory and unfair HPV vaccination programme in Britain, one which has left millions of boys and men unprotected from the biggest sexually transmitted infection in the world.